Home Why Is My Toilet Leaking?

Why Is My Toilet Leaking?

While the answer to this question isn’t always as simple and straightforward as we’d like, there are various troubleshooting techniques we can teach you to determine the appropriate next steps to fix your leaky toilet – saving you worry, time, money and potentially disastrous flooding along the way. In many cases, toilet repair doesn't have to be complicated or costly.

Below, we’ve outlined the most common reasons your toilet could be leaking and the best course of action for each scenario. As always, your local plumber is your best source for accessing and diagnosing your situation.

A flapper’s primary function is to drain water from the tank to the bowl when a toilet is flushed. Located inside the toilet tank, the flapper is a valve, generally made of a rubber or plastic, that is connected to the flush valve and toilet lever (handle you push down to flush).

When the toilet lever is in its “resting” position, water within the tank holds the flapper against the flush valve opening, sealing off any water from entering the bowl. As a person flushes the toilet and presses down on the lever, the flapper (typically connected to the lever with a chain) is lifted. The flapper is full of air, and when lifted by the toilet lever, it begins to float – allowing water in the tank to drain into the bowl.

Once all water drains from the tank, the flapper can no longer sustain floating – causing it to sink and seal the flush valve opening and prevent the continuous flow of water into the bowl. Once the flush valve has been sealed by the flapper, the fill valve can once again refill the toilet tank with water and the process can be repeated.

Don’t let the flapper’s small size fool you. When cracked, warped, worn out or blocked by debris, such as mineral deposits from hard water, these devices can cause serious damage to your water bill without you even knowing it. In fact, flappers are known to cause “silent leaks,” when water continuously seeps from a tank into a toilet bowl, creating a faint “trickling” or “dripping” sound after being flushed – also commonly referred to as keeping your toilet “running.”

When flappers are no longer effective, they don’t seal the way they should and allow water to flow continuously from the tank into the bowl – simultaneously wasting water and increasing utility bills. To test the flapper, simply drop food coloring into the tank. If the food coloring appears in the bowl, then you can be confident the flapper is the source of your toilet leak.

How to Fix
Difficultly level: Easy, most homeowners can complete this fix on their own.

To replace a flapper:

To remove a blockage:

Clean the bottom of the flapper and the seal on the flush valve. In most cases, if the flapper is more than two years old, just replace. Mineral deposits will be difficult to remove and over time, the flapper will harden and no longer seal. 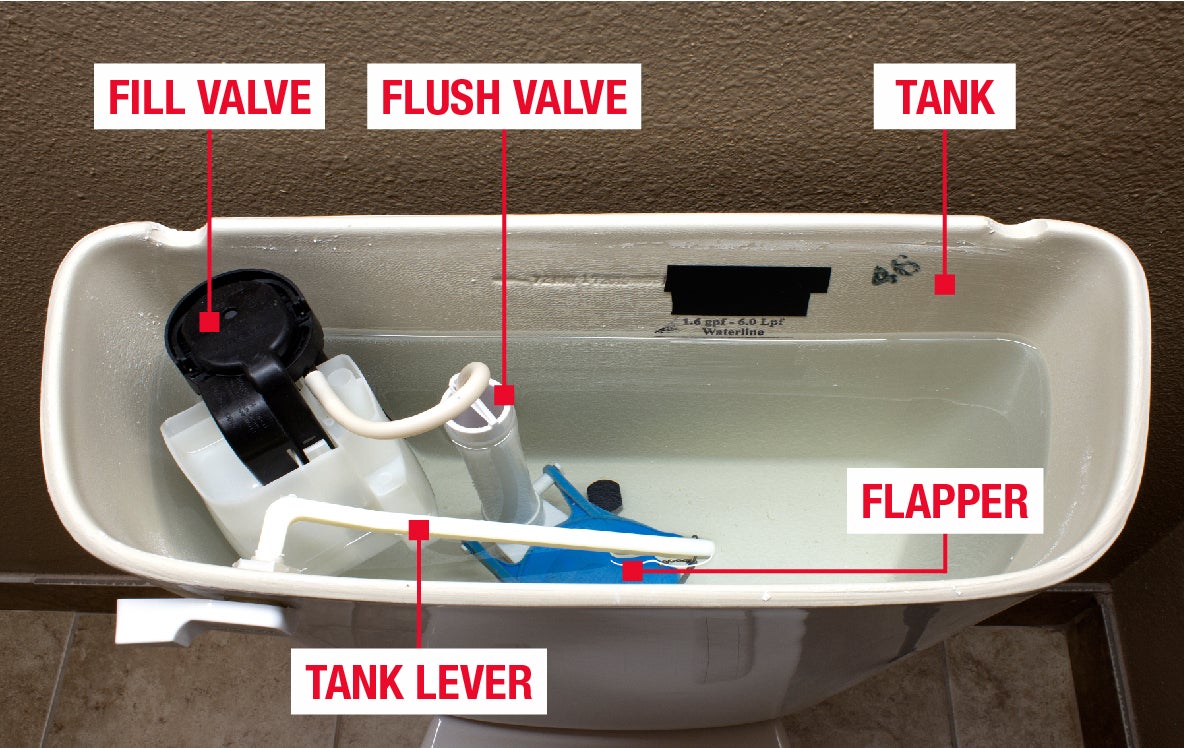 The fill valve, located in the toilet tank, is responsible for refilling the water level of the tank to the correct height after flushing. It contains a float that initiates the opening of the fill valve allowing water to enter the tank. As the water level rises, the float will also rise causing the valve to close and prevent more water from filling the tank.

The fill valve is connected to the tank by a nut (placed under the tank) and is sealed with a rubber gasket inside the tank. The gasket can develop cracks and become deformed over time resulting in a leak on the floor below the tank. Although rare, the connection point where the fill valve is secured to the tank can leak if it was not tightened properly or if the gasket was not installed in the correct orientation. If there is water collecting on the floor under the toilet, then this could be the culprit.

Difficulty level: Moderate, some homeowners can complete repair on their own.

Visually inspect gasket to look for cracking and possible deformation. Replace if necessary. Check the nut that fastens the fill valve to the tank and hand tighten if loose.

Water supply lines are an integral part of a toilet’s anatomy that are often overlooked by homeowners. They connect a toilet fixture to a cold-water supply, enabling a toilet to flush and replenish. Supply lines can spring a leak, often severe, for many different reasons – especially when individuals fail to inspect and maintain them properly.

Over time, vibration produced from the constant opening and closing of the toilet’s fill valve can cause rigid supply lines to weaken. Hard water can also cause supply lines to become brittle, developing cracks on the nut that connects the two pieces of hardware. Any bumping of the supply lines can also disrupt their connection seal. A broken supply line is usually very easy to spot because it often produces puddling at the base of the toilet. In extreme cases, a defective supply line can result in complete toilet failure or major flooding from a burst.

Difficulty level: Moderate, some homeowners can complete repair on their own.

Most manufacturers recommend replacing supply lines every three to five years to avoid an unexpected burst or flooding. Additionally, a new supply line should be installed whenever you remove the toilet and replace it.

Made of a soft rubber material, the tank to bowl gas gasket is a simple and straightforward device. As its name suggests, the gasket provides a watertight seal between the tank and bowl. A broken gasket will result in leaking at the base of your toilet tank.

Closet flanges and wax rings work in tandem with one another. If the closet flange cracks and causes the toilet to become unstable, the rocking movement can also break the wax ring. When this occurs, water will leak from the base of the toilet and often through the ceiling below.

Improper installation practices are typically the reason for this type of failure. Many people tend to rock a toilet back and forth during installation. What happens to the closet flange because of this? Because wax material has no memory, it won’t be compressed evenly if this rocking movement occurs. A lack of even wax compression will likely result in several leak paths. Our experts recommend using a slight side-to-side twisting motion when placing a new toilet on the wax seal. 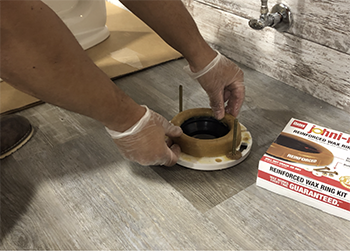 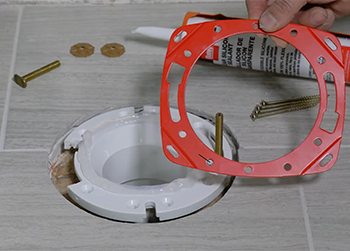 Exhausted our list and still can’t fix your toilet? Give your local plumber a call for expert help and guidance.

How to Install a Wax Ring

Can wax rings be stacked on top of one another to make up for the extra space between the toilet bowl and toilet flange, and still create a watertight seal?

Although stacking two wax seals on top of each other seems to be a common practice, Oatey does not recommend this application. We recommend using a jumbo or extra thick wax ring instead the stacking method. Also consider raising the flange height with one of our spacer kits.

What ingredients are in wax gaskets?

How is a wax seal installed?

It is always important to first set the toilet bowl in place before installing the wax seal; this will confirm that the toilet bolts are aligned properly, and the floor can be checked for levelness in case the bowl will need to be shimmed during installation.
See More
Oatey Blog

Whether you're a new pro entering the industry or a seasoned plumber in need of a quick refresher, here are five best practices when installing toilet flanges. We are also offering...

Whether your first residence or your third, purchasing a new home can be an exciting adventure. More often than not, you have a list of must-haves, ranging from the number of bedro...