Home How To Unclog A Toilet

How To Unclog A Toilet

Learn how to plunge, the proper way.

So, you have a clogged toilet… now what? With the right plunger, a little elbow grease and some easy-to-follow tips from our experts, you’ll be able to confidently tackle one of those annoying clogs on your own.

First, let’s discuss why a blockage may develop in our toilets. The most common and obvious reason is the overuse of toilet paper, which typically gets lodged in the trapway or deposits in the sanitary pipe. Flushing any material beyond toilet paper or human waste can also cause serious obstructions to occur. Items such as feminine products, paper towels, cotton balls, baby wipes and “flushable” wipes should never be discarded in your toilet. A general rule of thumb to follow – if it’s not toilet paper, don’t flush it!

You may also be susceptible to more frequent clogging if the sanitary pipe serving your toilet is made of cast iron pipe. Cast iron pipe can start to corrode, which causes scale to develop over time. As scale develops on the inside of the pipe, the once-smooth surface becomes jagged, making it easier for toilet paper/other solid contents to get caught, build up and eventually form blockages.

Generally, there are two types of clogs that will stop up a toilet. The first type occurs in the trapway (trap). You will know the clog is in the trap when water in the toilet bowl immediately rises upon flushing instead of creating that “vortex-like,” circular motion you’re familiar with that carries contents out of the bowl.

Second, the blockage can get lodged down further within the toilet’s sanitary pipe/fittings, typically located in the fitting directly connected to the closet flange but can be up to five feet away depending on how the piping was installed. One way to tell if your clog goes beyond the trap is by checking your sink and tub drains. Often, sinks and tubs drain into the same main drain pipe as your toilet – so if they’re draining properly, it’s likely your clog lives in the trap.

A plunger is often the first tool most homeowners reach for when tackling a clogged fixture (and with good reason!) In most cases, plungers do an excellent job loosening or removing blockages in a trap, particularly those caused by toilet paper build-up. A plunger is a simple and straightforward tool, utilizing basic physics to clear clogs. When pushing a plunger down a drain opening, pressure is increased within the pipe. This pressure differential then forces the water/debris within the pipe downward. Pulling back on the plunger will then alleviate pressure in the pipe and permit water to rise and flow in the direction of the plunger. This constant change of pressure via manual force causes blockage(s) to loosen and eventually flow freely down the drain.

It’s also important to note that all plungers are not created equal. Certain plungers are designed specifically for different plumbing fixtures. For example, a cup plunger that’s made for clearing sinks and tubs. Our technical experts suggest having a flanged plunger on hand when your toilet experiences a blockage. This type of plunger has an additional smaller rubber cup (called the flange) that extends below the larger cup. The flange is inserted into a toilet’s outlet and seals off the end of the P-Trap, allowing for more force to push out a blockage. 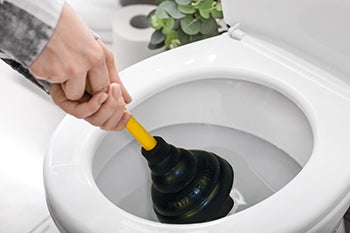 A toilet auger (also called “closet auger” or “toilet snake”) may be necessary when an extra tough clog appears and plunging just won’t do the trick. However, most people don’t have one of these augers on hand. An auger is essentially a specialized drain snaking tool designed to go through the toilet trap. It’s inserted into the outlet of the toilet. While pushing and rotating the handle, the tool works its way through the trap, extending about 12 inches into the sanitary line to dismantle and catch nasty obstructions.

Our technical experts do not advise homeowners use the following common household items in place of a plunger or auger, as each of them can compromise the integrity of the toilet, such as melting its wax seal, scratching porcelain finish or harming the user due to human error:

Now that we’ve covered many of the basics, grab your plunger and let’s get started!

When to Call a Plumber

Tried plunging or using an auger and still can’t seem to get that water moving freely in your toilet? It’s time to call a professional. You’re likely dealing with a large, stubborn clog that has made its way deep into the internal P-Trap and is beyond the reach of the average homeowner’s tools.

How do I install a Closet Flange Spacer Kit?

After the toilet has been removed, you must remove the existing toilet bolts and clean all the old wax off the existing toilet flange. Decide how much height is needed in order for the bottom of the top flange to be parallel with the finished floor height. You should replace the existing flange if it is broken or rusted badly; the spacer kit will not work for this application. After confirming the existing flange is in good condition, install the new extra-long toilet bolts into the flange. You can use the gaskets that come with the kit to seal between multiple PVC spacers, but 100% silicone is recommended between the top of the existing flange and the bottom of the first spacer. This will ensure that all voided areas are water tight between the transition points. After the desired height is reached, the flat washers and 1/4" nuts are threaded onto the extra-long bolts. This will compress and hold the spacers in place. It is recommended that you try and secure the new spacer or spacers to the subfloor through the four holes molded into the spacers. You can now install a wax seal and finish the toilet installation. Never use one of the seals in place of the wax seal. THE TOILET WILL LEAK WHEN FLUSHED!

Is there a flange that can be used to replace a broken or corroded cast iron flange for a toilet?

How do I install a No-Caulk Shower Drain (step by step)?

Contact our customer service department and they will be happy to send you a copy of the instruction sheet and exploded view drawing.
See More
Oatey Blog

3 Simple Plumbing Projects to Complete Over a Weekend

As we approach the end of the summer season, you may find yourself running out of time to finish those projects you vowed to complete before the colder months come around again. Bu...

How to Plan for a Bathroom Remodel

The key to making a bathroom renovation a success is solid upfront planning. The more you plan, the more time and money you will save. First, research what bathroom design trend...

During the 1980s, Barrett Hines would ride to school in his dad’s carpet van with his brother growing up in Temple, Texas. Eventually, Barrett would follow in his dad’s footsteps b...