Irrigation Contractor Andrew Shea: "With Hot Blue, I'm confident there will be no pipe leaks."

Irrigation specialist uses Hot Blue PVC Cement because it doesn’t drip and it sets fast —but not before a connection can be properly made. Shea also enjoys the “peace of mind” of knowing that the product will not result in any callbacks to repair broken pipe joints. 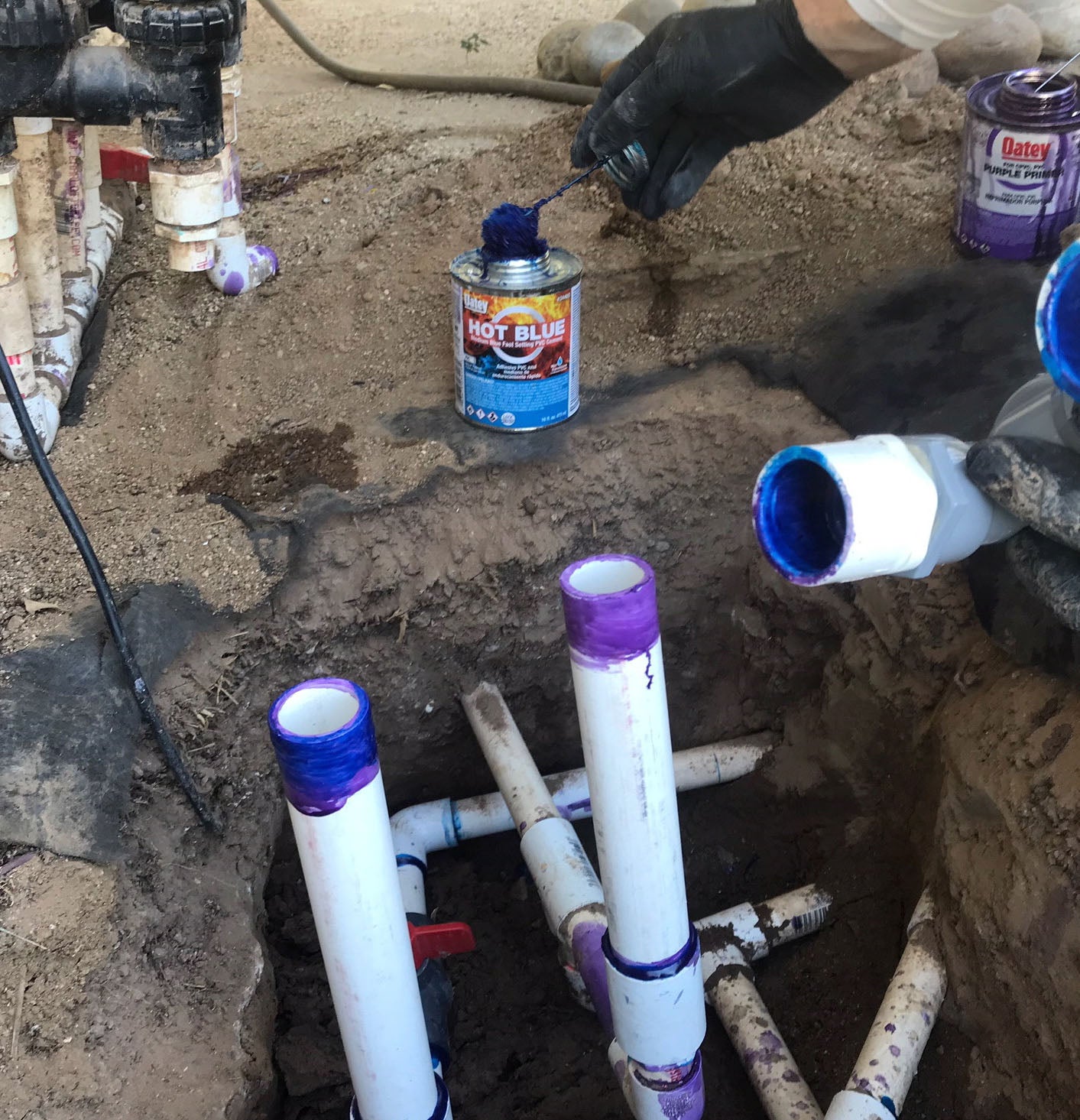 FALL 2020 | IMPERIAL, CA — When the summer sun arrives in the Imperial Valley of California, few places in the American Southwest or anywhere else in the United States are any hotter. Daytime temperatures average in the low hundreds during June, July and August, but highs above 110°F are not uncommon, according to contractor Andrew Shea, owner of Wild West Landscaping & Irrigation LLC.

Originally from Missouri, Shea relocated to the Valley in 2013. Since March 2014, he has carved out a solid business niche helping growers, businesses and homeowners cope with the desert heat by renovating and maintaining their sprinkler systems. A high-energy entrepreneur with a passion for his work, Shea estimates he and two crew members work on approximately 100 projects annually.

Wild West bills itself as “the only licensed and insured landscaping and irrigation expert in Imperial County,” and Shea is tremendously proud of the reputation his young company has established in only six years. A member of the California Landscape Contractors Association, Wild West won that group’s “New Member of the Year” honor in 2019.

Through California’s Contractors State License Board, Wild West is “a licensed contractor, as well as bonded and insured,” Shea emphasizes. “We are a legitimate, consumer-focused enterprise, as well as a very unique one in our industry.

The “unique” aspect derives, again, from spending roughly a third of the year dealing with Imperial Valley’s intense heat. How? As the second half of Wild West’s positioning statement reads: “We strive to deliver exceptional work using only the highest quality parts.”

The irrigation and sprinkler systems Shea builds and maintains consist largely of PVC pipe in diameters from half-inch through two inches, depending upon the application. Pipe quality is absolutely critical, he says. “Systems will sometimes come apart if the PVC is substandard. We use only the best pipe and fittings. I don’t want to have to drive two hours back to a job site because a system I renovated came undone and flooded someone’s property.”

System quality is only as strong as its weakest connection. Which is why Shea pays close attention to the glues his crew uses to build connections. The latter can number as few as 20 on a residential project to 300 on a large commercial or agricultural job. Given the high heat of a summer job site, Shea’s crew must work quickly — not only to maximize productivity, but also to accommodate the setting time of the cement. Move too slowly, and the glue will fail.

This is why Shea uses Oatey’s Hot Blue PVC Cement, which is specially formulated for extreme, as well as normal, weather — including very cold and very hot, humid conditions. Hot Blue is engineered for use in a wide range of projects, including wet applications. But, as Shea explains in the following interview, he prefers to use Hot Blue on pressurized fittings in dry applications — that is, when the pipe and fittings are not submerged in water. He has found Hot Blue especially effective when summer temperatures in his desert locale climb into the triple digits.

Question (Q): For how many projects have you used Oatey’s Hot Blue PVC Cement since its introduction roughly a year ago? For what types of projects?
Andrew Shea (AS): “Maybe 16 cans on 20 different jobs. It has performed great on all of them. Roughly half our work is residential, but the Imperial Valley is a large agriculture community, so I do a lot of work — maybe 25 percent of our business — for big farmers as well.”

Q: What did you like about it?
AS: “I like how it doesn’t drip down the pipe. Other glues run and drip, while Hot Blue is more gooey and it stays put on the connection, rather than running. That means a cleaner, better connection.”

Q: What is the setting time? It’s fast...but not too fast?,
AS: “Hot Blue does set fast. But I have some play time: I hold it for 10 to 15 seconds, and it is firm. It also dries quickly in non-pressure applications — less than 10 minutes. Both of those benefits impact labor costs. As a contractor, I just want to get in and go on a project! A product that helps me make pipe connections quickly is invaluable. Finally, I like its reliability. Once I turn the irrigation system on, I am confident there will be no leaks anywhere in the system. In other words, the system will not come apart, and I won’t need to go back to excavate the yard to fix it.”

Q: How critical is pipe cement to system reliability? How is that demonstrated over time?
AS: “Every project has obstacles — drains, concrete, tree roots — that must be worked around. Those obstacles lengthen the installation time. So anything that helps speed things up without hurting quality is welcome. But pipe cements play a role in the durability of a sprinkler system as well. Tree roots are not only big and strong, but they are also smart enough to find the weakest points in a sprinkler or irrigation system. If the glue is not strong enough to resist, the roots will break the pipe connections by forcing themselves into the joint.”

Q: How does Hot Blue handle the extreme heat of the Imperial Valley?
AS: “It can get to be 120°F in the desert — that’s about as extreme as you will encounter. That’s why chemical companies offer me their glues to test: They want to see how their products perform in these extreme conditions. But even in the high heat, the Hot Blue stays consistent. Other glues I’ve used in dry conditions tend to clot or harden.”

Q: What impact does the water in the Imperial Valley have on PVC cements like Hot Blue?
AS: “Our water travels a great distance: from the Colorado River through Lake Mead and the Hoover Dam in Nevada and then via the All-American Canal [an 80-mile long aqueduct, located in southeastern California] before arriving in the valley. I have a large collection of original documents, photographs and maps from the All-American Canal construction that I have used to study the history of our water. That way, I’m better prepared on the job. Untreated canal water has grime and mineral deposits, and those deposits can have an adverse impact on an irrigation system. But I have found that Oatey’s Hot Blue works great even on agricultural systems that use canal water.”

Q: Given your success using Hot Blue to date, will you continue using it?
AS: “Yes. Where I have used it, in dry applications not under constant pressure, the product has performed well. As I said, I like its reliability, and I will give you an example. I recently had an orchard project with 500 feet of PVC, and I used Hot Blue throughout — not just because the application was ‘dry,’ but also for my peace of mind. The project was a two-hour drive from Imperial, so I thought: “Hey, Hot Blue is so reliable, I know the system won’t come apart, and I won’t need to make that four-hour round-trip again!”

We use cookies to anonymously collect information about how you use our site, monitor site performance, and improve your experience.

How to Solvent Weld with Oatey Products

What can I use to clean up purple primer?

Unfortunately once purple primer comes into contact with any material, the affect is permanent.

How are cure times determined?

Cure times vary depending on a wide variety of factors. Please review the documents below and read our blog for more helpful information. Solvent Cement Cure Charts Solvent Cement Instructions

What PVC cements allow for the longest set-up time, for multiple joint assemblies?

Many factors go into the solvent welding process, but the three most important considerations would be the pipe material, pipe size, and job conditions. For large-diameter pipe, th...

Solvent welding in a cold environment presents challenges that have to be counterbalanced. Why? Pipe and fittings take longer to soften in colder weather. The pipe is also more res...