Truckee Saniary District (California) identifies leaking manholes during heavy-rain events as the cause of serious system Inflow spikes; then leverages the Oatey Idea Portal to recommend an innovative manhole sealant that has helped solve the problem.

TRUCKEE, CALIFORNIA — The Truckee Sanitary District (TSD) is the public agency responsible for collecting and conveying wastewater in the greater Truckee area, located outside of Lake Tahoe, California. Serving a population of approximately 25,000 people in a 39-square-mile service area, the TSD collection system contains about 200 miles of sewer mains, 16,000 laterals and 43 lift stations.

TSD General Manager and Chief Engineer Blake Tresan explains that, although the TSD sanitary sewer system is designed to convey a large amount of wastewater, it still saw significant and problematic spikes in flows during rain events — despite their best efforts and use of all available technology. 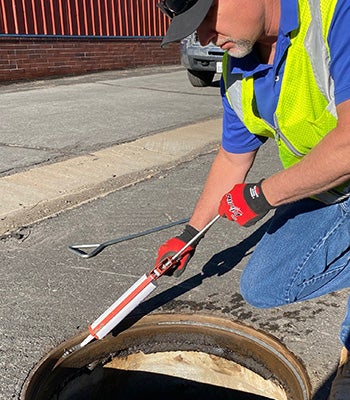 “The spikes in flows happened almost concurrently with rain events,” says Tresan. “It would rain, and data from our real-time flow meters would almost immediately indicate a spike in flows. As soon as the rainstorm ended, the flows would quickly go back to normal levels.”

According to Tresan, the water was not infiltrating through the system’s pipes for the simple reason that they are buried six feet underground. If that were the main route, he notes, “it would take much longer for that rainwater to get there.”

The conclusion? The I&I flow appeared to be coming through parts of the collection system exposed to surface run-off. “The only place where the sewer system meets the ground surface is at the top of manholes and lateral cleanouts,” says Tresan, “so we decided to zero in on the manholes as a likely source of I&I.”

TSD field supervisors Matt Ruge and Ryan Clifton and their crews conducted smoke testing of the sewer basins that experienced the highest rate of I&I during the rain events. The smoke testing showed that the largest and most common openings in the collection system appeared to be through the manhole frame and cover interface. Of the 200 manholes included in the initial smoke testing basin, approximately 90% of them leaked between the frame and cover.

“It was surprising, because we have always specified manhole covers with integrated o-rings, which we assumed created a watertight seal,” explains Tresan.

Further testing showed that small deviations in the casting sizes or the presence of debris created openings in the frame and cover, allowing surface water to enter.

At that point, a simple idea occurred to Ruge: “Wouldn’t it be nice if we could apply some type of sealant or lubricant to the manhole frame to completely fill that inner void.”

The TSD team knew it was on to something when they applied a pipe joint lubricant to the manhole frame — and it actually worked. Then came another problem.

“The pipe joint lubricant dried out and washed away over time,” Tresan recalls, “and it didn’t really have a long-lasting effect, so we decided we should try another product.”

After additional research, the Truckee team ended up trying Hercules Pro Dope, a petroleum-based thread sealant manufactured by the Oatey Co. “Not only did it work as well as the pipe joint lubricant,” says Tresan, “but it had much longer-lasting effects.”

The next step: TSD briefly contemplated doing their own product development, “I looked at all of the literature to see if anybody was selling anything like this product,” says Tresan. “Nobody was, so we discussed trying to go down this road by ourselves. But, in the end, we all have full-time jobs here. The best bet was to reach out to Oatey and tell them they had a product that we thought they could repurpose for another sewer-related application.”

TSD submitted their I&I product solution on Oatey’s dedicated Idea Portal. Oatey had created the latter as part of its ongoing effort to remain on the cutting edge by developing superior, safer products. Through the online portal, Oatey encourages new ideas, as well as new inventions and patents from both customers and the inventor community.

Tresan reports that “Oatey has been extremely generous, allowing us to enter into a partnership to develop this product. After submitting the idea, Oatey responded in less than 24 hours, indicating they were interested.”

Ultimately, Pro Dope served as the stepping stone to a new product: a nontoxic sealant/lubricant that could be applied to manhole frames: Hercules Shutout Manhole Lubricant and Sealant. 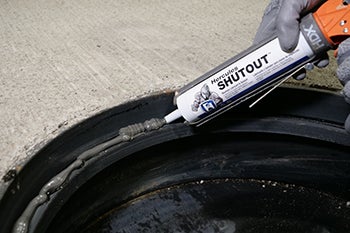 “After we applied a bead of this product to the frame, a perfect seal was created when the manhole cover was installed,” explains Ruge. Smoke testing confirmed that the sealant/lubricant application resulted in a completed air and watertight manhole frame and cover interface, delivering three major benefits: 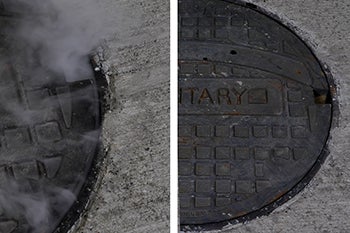 “And it doesn’t require any training,” he adds. “We apply the sealant/lubricant with a caulking tube, and we perform the application as part of TSD’s regular operations and maintenance activities.”

Once applied, a manhole frame and cover remain watertight until opened. “Because the product is nontoxic, we don’t have to deal with any hazards/waste issues. Meanwhile, it works better than anything else, because it fills the voids.”

Inflow is a significant problem in collection systems. It results in oversized conveyance, pumping, treatment infrastructure and higher capital and operating costs. In addition, it inevitably increases the incidence and severity of sewer overflows and backups.

“Hercules Shutout Manhole Lubricant and Sealant helps avoid significant capital and operating costs and reduces the likelihood of sanitary sewer overflows,” says Tresan. “But, most important of all, this one-of-a-kind manhole sealant provides these benefits while improving worker safety. In the end, that is our number one concern.”

How to Use Hercules MegaTape Thread Sealant

What is the maximum pipe size you can use thread tape on?

There are no limitations on the diameter of the pipe. You should always wrap the tape enough times around the male threads in order to fill the spigot (female threads). Any pipe sizes over 1¼” with pressure and fluids moving through it should have the male threads wrapped with tape and then the approved pipe joint compound spread over the tape.

How do I apply pipe thread tape, and are all the tapes applied the same way?

All ½”, ¾” and 1” wide tapes are installed the same way. After you select the proper size of tape for your thread, you will wrap in a clockwise motion, while keeping the tape at the bottom of the thread. For ½”, ¾” and 1” pipe threads you will only need to wrap the threads in a straight pattern 3 to 5 times around the male thread, if the tape width is the same size as pipe diameter. For 1¼” pipe threads and above or when tape width is smaller than pipe size, you will wrap 4 to 5 times starting at the end of threads and working up.

What pipe joint compounds should I use in an approved piping system filled with natural gas?

How to Create Leak-Proof Joints with Pipe Dope

What is pipe dope? Thread sealant, commonly known as "pipe dope," is used on a pipe to help secure a seal between threaded connectors. It comes as either a paste or tape and hel...

How to Check for a Gas Leak

If you suspect a gas leak in your home’s piping system or if you are a trade professional whose gauge detected a leak during a pressure-test on a new piping rough-in, a pipe leak d...

While most all-purpose, professional-grade PTFE thread-sealing tapes will do a fine job, regardless of appearance, have you considered how the look and feel of thread sealant tapes...