Nashville, TN — Plumbing a high-rise hotel like the new Grand Hyatt Nashville — phase one of the 16-acre Nashville Yards development — is a project as challenging as it is massive. Meeting such a challenge inevitably requires a certain flexibility in both materials and approach.

Now in the latter stages of construction, the 784,000-square-foot Grand Hyatt features all the amenities you would expect in a first-class hotel: spa, swimming pool and fitness center; assorted banquet and meeting rooms; plus two ballrooms, a rooftop bar, a ground-level restaurant and three levels of underground parking. The bulk of its towering 27 stories are devoted to 591, well-appointed guest rooms, each with a shower, toilet and a double-bowl, his-and-her vanity.

In a construction project of this magnitude, even a modest reduction in installation labor — repeated over that many rooms — promises to yield substantial cost savings. That is what mechanical contractor Lee Company had in mind when it recommended to the building team of Clark Construction and Bell Associates that the MODA Supply Box System be used for the plumbing connections at the water closet and at the lavatory’s hot-and cold-water supply lines in each guest room.

The savings are easily demonstrated. On a conventional plumbing install, the plumber stubs out the rough-in coming out of the wall, capping that line off with a four- or five-inch copper stub-out. Once a successful pressure test confirms there are no leaks, the plumber returns to cut off the cap and attach the proper compression valve trim for eventual hookup to the toilet or sink.

But with MODA, from Oatey Company, installers can skip the interim step with the copper stub-out. They simply rough-in the modular box during the initial step, including the compression valve itself.

“From there, after the pressure test, you are immediately ready for the final hookup,” says Lee’s Jesse Whitaker, project superintendent. “Eliminating that middle, stub-out step is a huge, time-saving convenience for any job, especially one the size of the Grand Hyatt.” Lee mocked up three MODA boxes in the model guest room for the project — one for the toilet and two for the lavatory. The owner and the general contractor recognized the value of the boxes from a mechanical standpoint, but they did have important aesthetic objections.

The white finish of the boxes’ universal faceplates did not match the “Agreeable Gray” of the nearby HVAC return-air grille. Without a color match, there could be no approval of the MODA boxes.

Fortunately, local sales agent Jim McClain of Wm. McClain & Company, which has represented Oatey products in Nashville since 1964, was “agreeable” to a fix. If the only choice was to repaint the faceplates (which are interchangeable on all MODA supply boxes, regardless of application), he’d find a way to get the job done.> 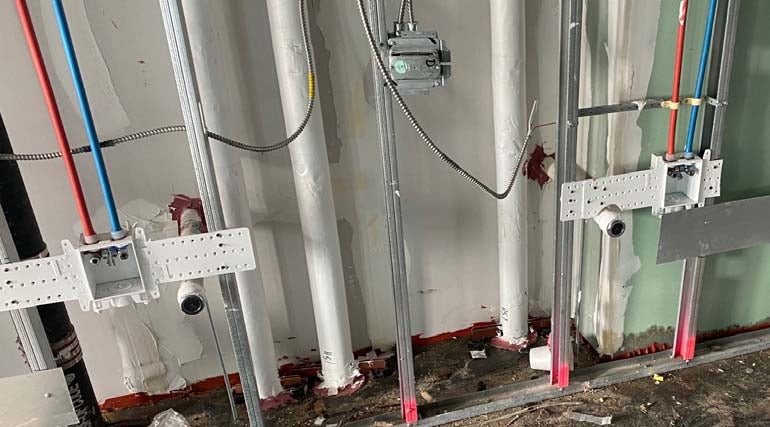 But why paint only 600 plates when each of the 591 rooms would have not one, but three MODA boxes?

Simple. The two lavatory plates would be concealed behind the double vanity, according to Whitaker, so no repainting was required. Only the toilet plate would be visible to a guest. “But even so,” explains Whitaker, “we were able to reposition the box from the center behind the toilet to one side of the fixture.” That way, it is not visible upon entering the bathroom.” Available in standard, fire-rated and gas models, MODA modular boxes are made of durable PVC, so that plumbing-supply connections can be made PVC to PVC. The box itself can be mounted with a single screw to a behind-the-wall stud and set flush with the wall. Thanks to the two-piece design of the plumbing valve, no drywall needs to be cut during servicing: The tech simply removes the faceplate and disengages the copper LocPin™ clip holding the valve top and tail pieces together, removing the former in need of replacement.

Adds McClain: “One of the prime advantages of these boxes is they keep the valves and the piping completely recessed and out of harm’s way from accidental bumping both during and after installation. The vanity installers at the Grand Hyatt especially liked that recessed feature because it allowed their product to fit tight to the wall.” 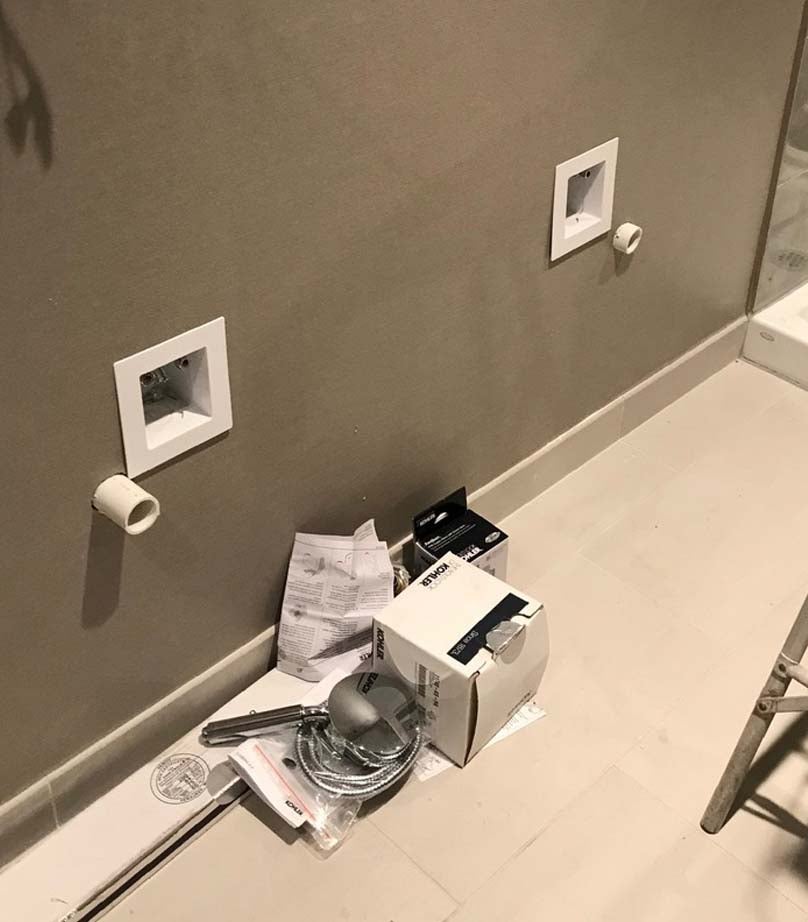 Repainting the toilet faceplates, of course, met the requirements of the Grand Hyatt developer and the GC. That, in turn, allowed the Lee installation crew to achieve the much-anticipated labor savings that drew them to the MODA Supply Box System in the first place.

“Mechanical contractors are increasingly seeing the value of these modular boxes,” says McClain, who confirms that Lee saw reduced installation time in line with their projections.

“We have to remember that, with MODA, we are looking for these contractors to change the way they plumb a commercial job. That can be a very tough ask. But the savings will speak to any mechanical willing to do the calculations and make the comparisons with the traditional ways.”

And once a progressive mechanical contractor has a successful experience with the MODA Box System, they will be that much more inclined to use it on future projects. Notes McClain: “Lee Company has started to make these boxes part of their standard protocol for when they quote a commercial job. They are becoming a key part of how they do plumbing.”

What are ice maker outlet boxes?

Ice maker outlet boxes are designed as a termination point for the water line connection when installing an ice maker.

What are washing machine outlet boxes?

This box is designed as a termination point for all drain and water connections necessary when installing a washing machine.

Are there height restrictions when installing a washing machine outlet box?

We always recommend that you refer to the washer manufacture instructions to ensure they do not have specific guidelines for finished drain elevations. The maximum height of the WMOB would be determined by the washer manufacture, accessories such as pedestals, and local plumbing codes.  Oatey recommends the maximum elevation of the inside bottom of the WMOB is 48” above finished floor. The minimum elevation of the inside bottom of WMOB is 34” above finished floor, this is the same height as the flood level rim of a laundry sink with or without a cabinet.
See More
Oatey Blog

What Causes Banging Pipes and How to Stop Them

The washing machine stops filling and you hear it. BANG! from inside your wall. What is that noise? And how do you stop it? There are a few things that can cause noise and bangs...

How to Choose a Washing Machine Outlet Box

There are many benefits to including a washing machine outlet box in your new laundry room construction or renovation. Some of the benefits include: Quick, safe access to wa...

Plumbing Contractor Mike Corsillo: "The MODA Supply Box is a win for us and the builder"   This Ohio new-construction plumbing contractor keys his success on rigorou...